Well, as much as I would like to say that I had a super productive week this week, but… I did not. Which is okay. The watch that I was working on last week gave me some trouble. I didn’t take a lot of pictures of it due to me trying to figure out what was going on with it. Let me detail the problems.

I got a new watch to start on once I bagged up my first one. 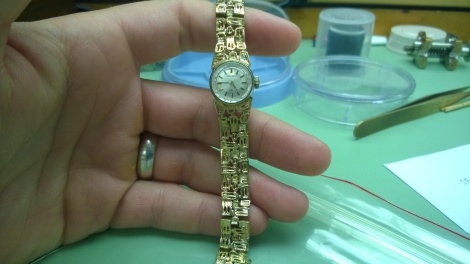 It’s a Seiko! And a ladies watch. And a pin-detent (I’ll explain that in some pictures later). If you take a look in the picture, I got a new movement holder! It’s in the background-it’s a vintage L&R holder. I won it in an ebay auction along with a ton of other holders. I’ve got some new tools and things coming in later this week, so I’ll go over all those later next week.

The case was dirty, the crystal scratched to heck and back, pitting /dents on the crown, tarnish on the case, etc. It wound, but the lack of second hand didn’t let me know if it was running or not, so I took the movement out of the case. 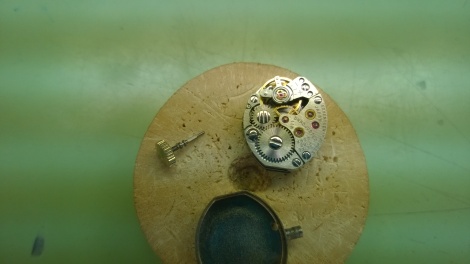 Gear train looked good and the balance was moving nicely. I timed it and it was okay. The oil was in poor condition/non-existent which would possible explain the timing. I removed the balance to check the kickback and it was laughable. There was non and in fact when I turned the crown, the escape wheel was just lazily stuttering around, so I knew that I had at least a mainspring issue.

Checking the dial side was a bit of a shock. 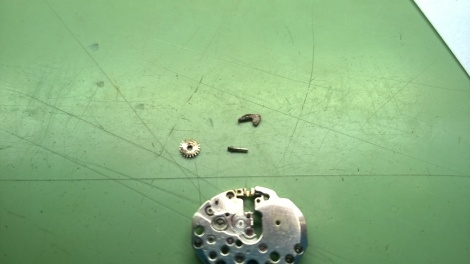 Rust on the winding pinion, detent, and around where all of those hang out in the plate. I took a while with my pre-cleaning procedure (pegwood, rodico and watch paper) to hopefully have some clean parts after the ultrasonic. The two parts that aren’t the plate or winding pinion (wheel) make up the pin-detent. In a lot of watches, the detent is screwed to the the plate (in case you forgot, the detent keeps the stem in place when the stem moves from winding to setting positions). In this watch, instead of it being a screw, it is a pin. It is a two piece part that is a lot easier to install. If you need to remove the stem when the movement is cased up, you just push on the pin and it will move a bit to allow the stem to move.

You remember when I mentioned that the watch had no kick-back and that there was a mainspring issue? 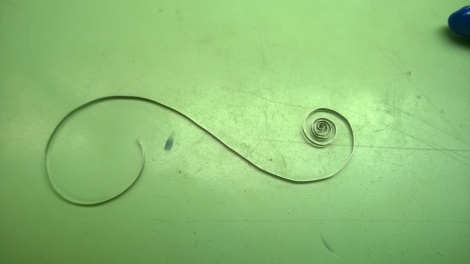 Wow. I really wish I had taken a picture of it when it was in the barrel. It was hard not to laugh. Look at all the kinks that are in that spring. There is one kink near the innermost coil that caused all the bends that you see along the length of the spring. While I was running the movement and parts through the ultrasonic, I worked on the spring with some tweezers/pliers and a bamboo peg (thanks Tim!). I was able to get it to look like this: 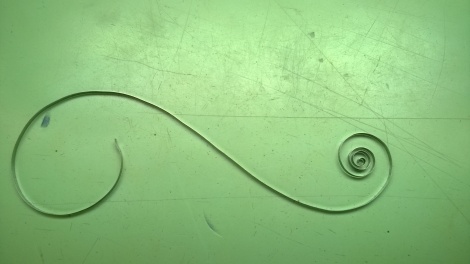 Not too bad. There are still a few smaller bends that I need to take care of, but here is a comparison picture: 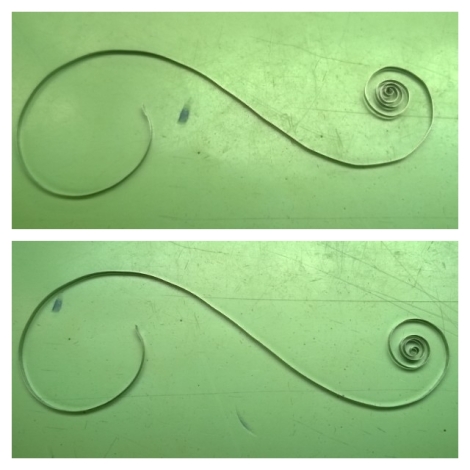 If you click on that, you can see a pretty good idea of what I did.

I got the parts out the ultrasonic and some of the rust that I was worried about, but it was still there. Mr. Poye said that there since the rust was more surface rust and not corrosion, the parts were going to work. At that point, I had run out of time in class, but I am hopeful that I can get it put back together without any issues on Monday and move on to a new watch.