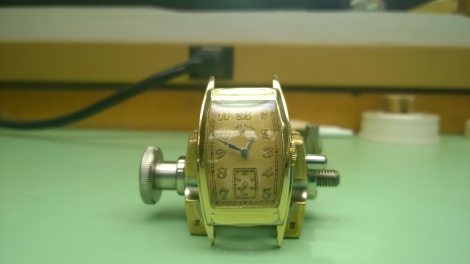 Here is an excellent example of American Watchmaking. It’s a Lord Elgin from around 1939. The dial has obviously aged but the hands looked great; mechanically, the watch had some issues: 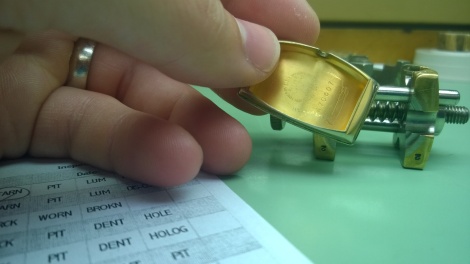 When I took the case off, I was treated to this. I’m really glad that we have moved away from this kind of stuff (scratching stuff inside cases). I still struggle to figure out why someone would scratch things into something that doesn’t belong to them, but at this point, I’ll chalk it up an antiquated practice.

Pretty good looking movement. In this picture, I have the balance and pallet removed so I could check the kickback. Obviously, with the winding issues I was having, there wasn’t any kickback at all. With the highly erratic results, I figured there had to be something more than just a mainspring issue going on. Digging a little further, and I came across this: 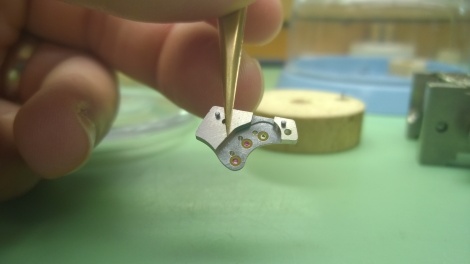 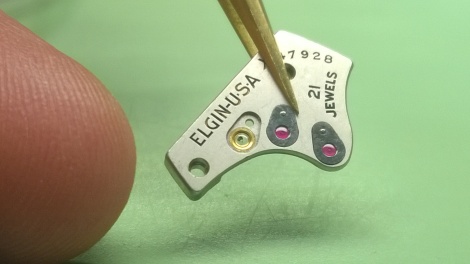 Okay, this one is going to take some squinting, but click on the picture and zoom in. The upper pivot of the escape wheel is very slightly deformed with a very small indention just below the top of the pivot. The first time I looked at it, I thought it was supposed to be there due to the almost uniform look to it, but double checking it, the indention didn’t go all the way around the pivot. Luckily, I was able to get a replacement bridge for the watch. As for the escape wheel, since the deformity wasn’t too bad, it was suggested I leave it and see what the timing results looked like. Since this is a student project watch and not a customers watch, it isn’t necessary to have it “perfect.” Obviously, if I were in the real world, the part would be replaced if a replacement part was available. I don’t want to give the impression that “good enough” is what I am trying to achieve. There is a level of excellence that I am working towards, but when you have a 68 year-old watch that the school may not have replacement parts for, I don’t want to take away time from other students asking my instructor to dig through spare parts.

Once I got the bridge addressed, it was time to take a look at the mainspring. The mainspring in the watch is the kind with the “t” shaped hook. The hook and the “t” weren’t in the right place, and the inner coil was loose. With those two issues, it’s no wonder I was getting a slipping when trying to wind the watch (as well as no kickback). Here are some pictures of what the barrel looked like (not from the watch I was working on, but from last semester during my mainspring section).

If you look at the above picture, there are two cutouts on the barrel cap. The one on the left is the cutout for the “T” in the barrel tongue. The “T” is pictured below.

In the watch I was working on, the “T” was sandwiched between the barrel cap and the barrel. The quick fix was just making sure that I inserted the mainspring in properly. As for the slipping around the arbor, as with the other times, just a quick fix with my pliers.

After those repairs, I cleaned and oiled the watch and timed it out. After adjusting the regulator, I got a pretty good timing tape:

So, one thing I want to mention about the timing tape is sometimes you will see it as an almost unbroken line, and others you will see it looking like this. Part of the reason it moves from center to the left and back again is due to a couple factors:

For an almost 70-year old watch, I was pretty pleased with the rate results. As was my teacher.