Okay, this is going to be a pretty short post due to me having spent the past two days doing more hairspring work. I am still working on the Out-of-Round bends. Before I get into the bulk of the text, I have learned a pretty valuable lesson regarding my eyes: I need to switch the loop between eyes and take a break and focus on items farther away every so often. With the spirals and up-close focusing using only my right eye, my left eye was getting a little blurry yesterday. Today I did the loop switching and focusing on objects and my eyes were a lot better.

On to the pictures!

Each time I correct the hairsprings, Mr. Poye re-bends them, but this time, he is making the new bend 1/4 turn more into the hairspring. As you can see, and will see in some other pictures, as the bend gets further into the hairspring, there is a lot more distortion. On the left side, the coils are a lot closer together due to the bend creating the gap on the right. Once the bend is corrected, the spring looks a lot better:

As you can see, there is still a slight bend going on, but it looks better. At this point, I can keep trying to correct it, or pass it along to Mr. Poye to look at. I am opting for the latter because the past few times I have tried to correct it a bit more, I have made a mess things.

Again, the distortion is pretty bad. If this were in a watch, you would notice some erratic time-keeping. It would also need to come in for a service sooner because the spring would be rubbing against parts that could cause oil to get on the spring. Once that happens, the time-keeping would be even worse and the oil could work it way into and between other parts causing excess friction.

Still some distortion, but it is not as bad. Some of the coils are little too close, but they aren’t touching like they had been.

With each quarter turn that the bend takes, it gets more and more difficult. The amount of pressure needed to correct the bend gets less and less, and you need to be careful with how you grip the spring-it can go out of flat a lot easier which makes things more difficult.

Again, notice the tight groupings of coils on one side with the gap opposite it. 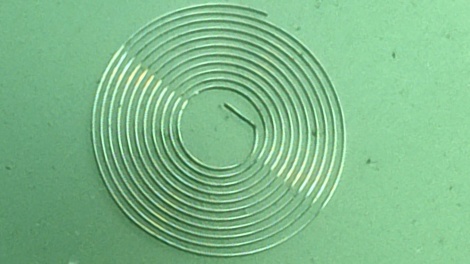 I broke out another pair of tweezers for some of my work today. The #5’s are smaller tipped and easier to get in between coils.

Here is both an Out-of-Round and Flat. It’s hard to tell looking from above, so hopefully the picture below will help

You can see that the spring has two different planes that it is on. Like I said in my last post, to fix an out of flat is going 180 degrees straight down while staying on the same coil.

This one is a bit more of a gradual bend. You can see the space on the right side between the 3rd and 4th coils (work from the outside in). The fix for this was a lot of gentle prodding with the tweezers. Unfortunately, I forgot to snap a picture of the after, but needless to say, it took a bit more time of studying the spring before I made my move.

All in all, I’m enjoying the process (albeit with some frustrations, but I’ve only been doing this for a few days. There are no expectations that I’ll be perfect at it), and looking forward to working more with hairsprings. Like I said last time, this truly is the beginning of my watchmaking education.