Wednesday was very reminiscent of what we had done at the beginning of the year. I was able to take apart a few watches, get them cleaned and reassembled. I took a few pictures of the polishing set-up as well as some of the the afters of a movement or two that I took care of.

Here is the beginning polisher that I’ll be using for the next couple of semesters. The buffer on the right is what I am using for metals, and the one on the left is going to be for plastic crystals. These rotate about 3000 rpm’s. 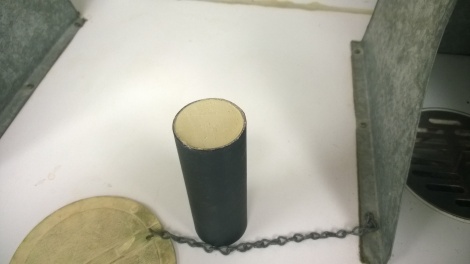 This is the yellow rouge. It smells like cinnamon. 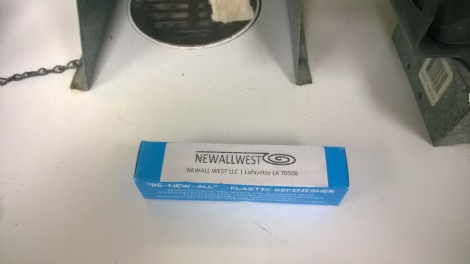 Here is the compound that is used for the acrylic crystals.

Here is the container that we use that has the oil-based cleaner in it. The last watch that I put in it was pretty dirty.

The rinse process is pretty much the same. This is the second rinse. The first one is pretty much dipping the the parts into a rinse to get as much of the cleaner off as possible. The third rinse is the same as the second. 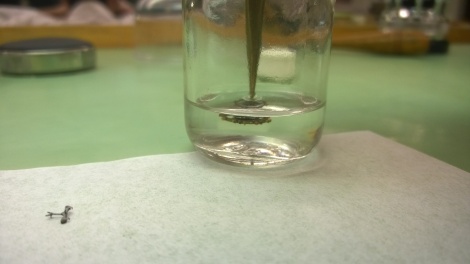 Instead of contaminating the whole bottle of one-dip, we just use a little at a time for the balance and the pallet fork. After cleaning the balance, we can do one of two things. We can either dry it on some watch paper using a blower-bulb, or use some sawdust. Sounds weird, I know-but it works.

Just close the lid and give it a shake. It works really well and very quickly.

Here is a close up shot of a balance wheel that has a Breguet overcoil in it. You will notice that it is a different shape than the Lossier curves that we did in class. The stud on this one was a little difficult to get in place. If you look, you can kind of see the triangular shape that it has. There wasn’t a “hole” for the stud to go into. I had to slide it into place and use the head of the screw to hold it in its place on the balance bridge.

Oh man. Thursday. Thursday was… interesting. I was expecting more of the same on Wednesday. I was working on

this watch. I got the whole thing cleaned-movement, case, bracelet, crystal. I was reassembling it and noticed that the top pivot on the 4th wheel was missing. Mr. Poye was able to get me a replacement. Got it in and finished re-installing everything. Gave it a wind, and nothing happened. I soon found out that I was missing the lower cap jewel for the escape wheel. When the gear train bridge was installed, the downward pressure was causing the escape wheel to sit too low and not move properly. So I replaced it. Put everything back, gave it a wind and the balance wheel moved a couple times and then it stopped. Took the balance off and the spring was all screwed up. Mr. Poye was able to straighten out the spring. Re-installed the spring and for whatever wasn’t getting power transmission. I removed the balance and pallet to check if there was an issue there. Then I checked to see if the mainspring was moving. Then I checked each individual gear. After coming up blank, I handed it over to Mr. Poye. When checking the pivots, I didn’t notice the escape wheel pivots (top and bottom) were messed up. It took Mr. Poye a little while to fix it, but he was able to do it. That did it. Was able to get it running, cased it and put it away.

It was a good learning experience in some of the different problems that can present themselves in a single watch. Also, it was very cool to see all of the different fixes Mr. Poye seemed to pull out of nowhere. I guess that’s what 30+ years of working on watches will teach you.