My last watch I completed last week (on Wednesday, sorry for the late update. Just slammed with trying to get ready for an early Thanksgiving with my family) was this Arnex pocket watch. This thing was huge. The last time I had a movement this big was at the beginning of the semester when I was doing pallet stone adjustments on an ETA-6497.  The movement was similar to the 6497 in some regards, but wasn’t as nice to work on. It was still an enjoyable process, except for the case. I wish I had taken more pictures, but the case was a snap back/front style case. I used a dull razor blade to open it, and the back was being very stubborn. Once I got the case open and the crown out, it was smooth sailing from there. 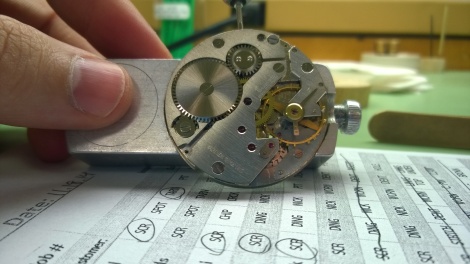 Seriously, this thing was huge. Right off the bat, I noticed a couple of things as I was going through my 16-Point Check:

The rest of the watch was pretty straight forward. It is always nice to not have to wear a loupe for the tear-down/re-build of a movement. I only had to wear it for oiling the cap jewels/hole jewels. I mean, take a look at the wheels of the watch-there is no way I was going to have trouble getting the pivots in their holes (and I didn’t. This was one of those magic watches that took a little tap of the tweezers to get them to stand up perfectly straight). 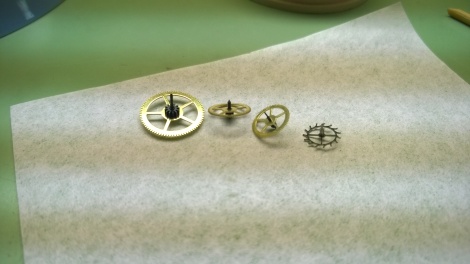 The escape wheel alone was as big as some center wheels on the watches I have worked on (or bigger)! The watch didn’t have much by way of oiling, but it still ran pretty well. When I took the barrel apart, the mainspring looked pretty good (so that lead me to conclude the oiling was responsible for the lack of kickback). I had to put the spring back in by hand (not best practices, mind you-but still good practice to do) due to the sheer size of it.

Oiling was pretty easy. I want to say, I have started using some micro-applicators for my grease (thanks for the suggestion, Tim) and it has made things so much easier than trying to use a dip oiler. If you haven’t used these before, give the a try. You can get a very nice and even application of the grease on whatever part you are doing, and if you poke around on the internet, you can find them is varying sizes. Greasing a stem and barrel arbor are a breeze with one.

Getting the watch in beat was a little tricky. When I first got it, it had a beat error of about .7, I got it down to about .4 before I accidentally went too far past that and ended up at 1.8. After another two tries, I was able to get it to .2. (Original tape on the left, final on the right). I was pretty pleased with the results. I got the movement cased up with relative ease (well, Mr. Poye had to put the caseback on for me. I was having a lot of trouble trying to get the caseback… lip to snap in place).

Here are the rest of the pictures I took from working on the watch. 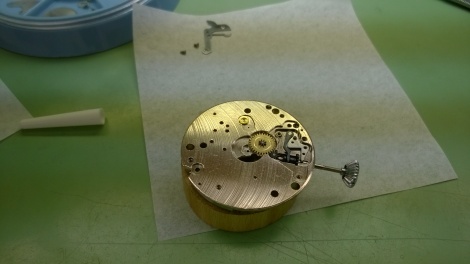