I want to apologize for the lateness of this post. I have been enjoying my holiday break, but I have also been thinking a lot about this final project. I can say that vibrating a hairspring is the hardest thing I have ever done (not just in school).

Of course, what sounds easy in summary is going to be intricate in practice. There are plenty of steps that occur between

The first step in the project is putting a collet on a hairspring. Though it had been more than a few months since I last did this, the confidence of using a new tool (If you don’t have one and are in school or are a watchmaker, I really, really, really (and I can’t stress it enough) recommend that you get a Bergeon 3007 Collet tool. This tool really proved invaluable not only to me, but to one of my classmates in the first semester) combined with all of the hairspring work I have done this semester, getting the collet in place was a breeze. The Bergeon tool helped a lot because it allowed me to keep everything level when putting the hairspring in the collet, pinning it, and centering it. I also used the tool to keep the collet in place while I trimmed the pin for securing the hairspring (for doing this, I used a piece of the hairspring that I broke off for forming the inner coil as my gauge to make sure that the pin I was forming was the right size for the hole in the collet. Once I got the width of the pin figured out, I pre-trimmed the pin with an x-acto knife and smoothed it with an escape file.).

After you get the collet on the spring and ensure that it is flat and roughly centered (it doesn’t need to be absolutely perfect for now), you place the spring on the balance wheel

and then take the balance wheel and suspend it from the clip of a Vibrating/Counting/Luthy tool.

This tool is very cool. It consists of a base with a master balance (this one is vibrated at 18000 beats per hour) and an arm that has a clip on it. The arm swivels around and the clamp is able to move forward and backward as well as rotates around completely.

Once all of that is set up, you press the tab downwards and rotate the whole assembly (sans the heavy base at the bottom) and the fun begins. The master balance and your balance will start to rotate back and forth as if they were in a watch. The goal is find the spot on one of the coils of your hairspring to cause the two balances to rotate in unison. You do this by watching the balances as the move and determine which one is moving fast and which one is moving slow. And this (at least for me) is hard to see. Like with anything hairspring related, learning how to see is the hard part. Especially with this process because my eyes wanted to focus on one of the balances as opposed to both and what they were doing.

Initially, when you do this, your balance is going to be slow (if you start at the very outermost coil) so you will need move along the length of the hairspring in towards the collet. You can initially make large jumps (a quarter of a coil or so) at first, but you will get to a point where you need to go smaller and smaller with the distance that you go along the hairspring so you don’t overshoot the initial vibrating point.

Eventually, you will get to a spot where you move the clamp about a millimeter and your balance is fast, and you move it back a bit and yours is slow. At this point, you have found the initial vibrating spot.

Once you have found the initial vibrating spot, it is time to figure out how you need to fix your hairspring at the collet. Remember how earlier I said that you don’t need to make sure that the hairspring is perfectly centered at the collet? That is because the hairspring needs to be re-pinned at least once. When you vibrate a hairspring, you need the vibrating spot to line up with the center of the collet as well as the spot where the hairspring is leaving the collet. You should be able to draw an imaginary line connecting all three spots I just mentioned. Unless you are a savant with colleting your hairspring, you are going to need to trim the center coil a bit as well as re-form the tongue. 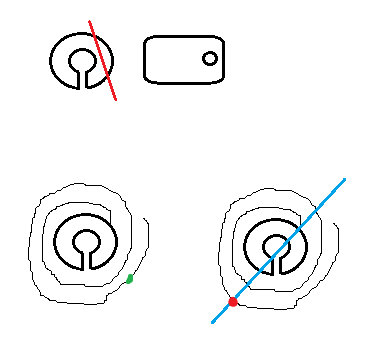 In the above drawing, there are a few things going on. The top is what your average collet will look like. The hole on the side (the red line in the first drawing) is where the hairspring and pin go. The last two drawings show what you will first end up with when vibrating a hairspring, and where it will eventually be (showing all three spots in line).

Once you have made a note of your vibrating point, you can break off the last coil (to be on the safe side) and then use a radian circle graph to help you in this process 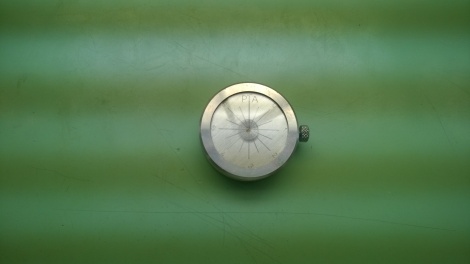 When you are using either a graph or the tool above, you need to rotate your spring to where the collet center and the hole for the hairspring and pin are pointed directly up. Going in whatever direction your hairspring exits your collet, figure out how many degrees your initial vibrating point is from the center and make a note of it, this will be known as  ∠A. Plug that in to the formula from above, and ∠B will tell you where your hairspring should be exiting your collet.

Again, using your radian circle, you will look at your hairspring and figure out where 140° would be from where the hairspring is exiting the collet, unpin the hairspring, form a new bend and pin it.

Once you have done that, you will then need to put your hairspring back on your balance, back on the vibrating tool, and clip it to the initial vibrating point. If, and I have to stress if, you have done everything correct at this point, the two balances should still be in sync and you should be aligned properly (collet center, hairspring exiting point and vibrating point).

Now you can work on perfectly centering the hairspring in the round and flat using truing calipers. Getting it flat first is going to be your best bet. If it is flat, getting it centered in the round will be a lot easier. And, if you use the collet tool, you won’t have to worry about knocking it out of flat when you are centering it.

Once it is flat and round, you stud the hairspring (roughly 90° away from the vibrating point) and attach the watch to the balance bridge, time it and see what the timing machine says your beats per hour are. You then will center the hairspring to the bridge, trim the excess length of the hairspring and you are done.

I, am not done. I cut too much off of my hairspring when I was studding it to where I don’t have enough room to center it to my bridge properly, so when I get back after the break, I will need to redo the process. It is a bit frustrating that I wasn’t able to finish, but such is life. As I said before, this is hard work. I will be ecstatic when I am finished because that will be another experience that I will have received in school that some watchmakers haven’t. Also, if I ever plan on doing vintage or antique restoration, having this skill will come in handy if I am unable to procure a new balance complete for a client.

This past semester was a lot of fun, and I feel like I really pushed myself a lot. I learned a lot, I got a lot of experience with different movements, and I have really expanded my skill set as a watchmaker in training. Once I finish up this project next semester, I will be starting my lathe projects and that is something I have been looking forward to for a while.

I am in the process of figuring out some content to do while I am on break. I won’t be doing the twice weekly update schedule that I had been doing, but I will try to get something up once a week until school starts.