I’m going to quickly go through the process while also adding some details that I left out of my last post.

When I got back to school, I got a brand new hairspring and started the process all over again. 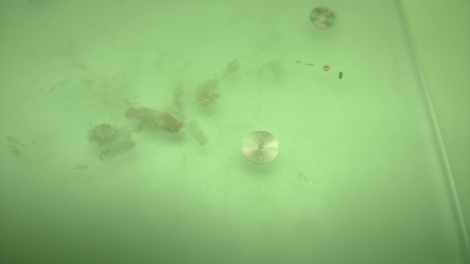 I was able to re-use the stud and collet from the first go around as well as salvage the pins that I had made for each.

The first step was removing just enough of the inner coils to allow the collet to get situated on the newly formed tongue.

After pinning the collet, you now need to make some general corrections to the hairspring to get it roughly centered (more on that later) around the collet. Once the rough corrections have been made, the hairspring goes on the balance wheel and then on to the vibrating/luthy tool.

In my last post, I had a couple videos showing the beginning and end results of using the vibrating tool. This time, I have a video that shows what it looks like starting at the very beginning of the process to the end. The videos have been slowed down, so the video is about 5 minutes long, but it gives you a good idea of what I was looking at, and for during this part of the process.

Once you have the initial vibrating point found, you need to fully make sure that the hairspring is completely flat and centered at the collet. 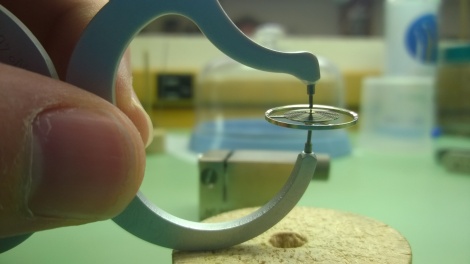 To do that, you use a pair of true calipers and give the balance wheel a spin. Watching the hairspring from the side and the top will let you see if the hairspring is kicked at an angle or wobbly at the collet. Take a look at the video below. The second part of the video was slowed down so you can really get a good idea of the kind of movement the hairspring will have when it isn’t centered in the round.

The best way to go about fixing the out of flat is putting the balance on a broach and, well, fixing it. If it is kicked upward, you need to grab the hairspring where it is exiting the collet and bend it down, and vice versa if it is kicked down.

To fix the out of round, you need to treat it like you would a typical out of round issue-but this time you need to visualize how you are going to shift the hairspring (if it is expanding out to the right, you will need to address the hairspring at the collet by bending it to the left to give it an even expansion and contraction).

This is the next difficult part. When you are are addressing the out of round, it is easy to kick it out of flat and vice versa. The space that you are dealing with is very small,

While it is kind of washed out, if you click on the picture, you can see the space you are working with for centering in the round and getting it flat

and even using a pair of #5’s, it’s very easy to make an accidental change to what you just fixed-so you are chasing one issue with another.

After you get the hairspring centered and flat, you need to place the stud on the spring and have it 90° away (towards the end) from the vibrating point. A quick eyeballing is all it takes initially to get the stud on the hairspring. Leave as much excess hairspring as you can (at least a half turn of a coil after it exits the stud) at this point. This is where I tripped myself up last time.

Click on the above picture. You can see that I left about 1.25 turns of the excess spring for the next phase of this process. To ensure that it wasn’t going to interfere with the movement of the balance, I brought it up and over the top of the bridge-since the spring that is on top of the bridge is coming from the stud, it won’t impact the expansion or contraction of the active length of the spring.

You will probably need to do this a couple of times to get the stud in the proper position, but once you do, you are almost done. Before you clean, oil and time the watch (properly), you need to center the hairspring to the bridge and put in a corrective bend. I’m not going to lie-I was extremely nervous about putting in the corrective bend. The corrective bend is called a bunch of different things (corrective, dog-leg, zig-zag, etc), but I prefer to call it nerve-wracking. Well, from this vantage point of having done it, it isn’t too bad, but I was terrified at the time. When you center a hairspring to the bridge, you take the hairspring off the balance and place it on the bottom of the balance bridge (like if it were in a watch). You screw the stud in place and you are checking to make sure that the collet is directly over the balance jewel (it won’t be). 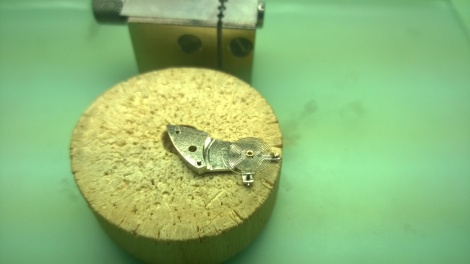 Forming the corrective bend can be done two ways-on the balance wheel or off. There are pros and cons to each. Forming it off the balance wheel gives you the greatest amount of control so you don’t create an out-of-flat bend but that control sacrifices your visual landmarks of where it needs to be in relation to the regulator. Forming it while the balance is in the watch gives you the best visual markers, but it increases the chance of kicking the spring out-of-flat. I don’t have any pictures of the process, but I will say that I spent a day (seriously), going through random hairsprings from my first semester making tons of bends.

You have the hairspring off the balance and you pin with some #3 tweezers where you want the bend to start. Using a second pair of #3’s and “open” up the spring. Moving a bit away from the first bend, pin the hairspring again and “close” it. Finally, you will need to nudge the hairspring a bit so it doesn’t have such a sharp initial angle.

The hard way (the way I ended up doing it) involves leaving the hairspring on the balance and in the watch and only one set of tweezers. It looks like this:

You pick your spot and angle the tips of your tweezers to do a pinch bend. Your hairspring is going to look crazy after that. Move further along, and do a second pinch bend which will cause the spring to correct the curve. Go back to where you did the initial bend and move it so the hairspring is creating a concentric curve.

I started and stopped this process so many times. I was nervous because if you remember, this was my third hairspring. My first one broke at the tongue when I was reforming it, the second one I cut too much off the end, and I’ll be damned if I was going to do this a fourth time because I screwed up the corrective bend. Once I got the bend done, I had to correct an out of flat that was in the central portion (the straight part) of the corrective bend. It wasn’t too bad, but I took my time so I would get it right and not screw anything else up. 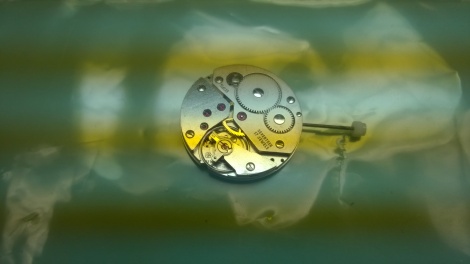 If you click the picture, you can see my corrective bend that I put in place. I think part of my hangup with forming the corrective bend is you spend a good chunk of time trying to fix bends in hairsprings that are messing with the function of the watch. To purposefully put in a bend to make the watch run better is a paradigm shift that takes a moment to accept.

I cleaned the watch, oiled it, timed it and it looked good. Except for the pallet fork. It gave me some trouble. I had to run it through the ultrasonic a couple times, went through some pegwood sticks, some watch paper and changed out my OneDip solution a few times before those jewels were sparkling clean.

I don’t think I was any prouder of myself once I turned in the watch-clean and running. It was definitely the hardest thing I’ve done and now that I’m past it, I can breathe a sigh of relief.

Some of my classmates and some watchmakers I have talked to have asked me if it was frustrating doing something that I probably would never do in my professional career. Having thought about it for a bit, I can say that I think the purpose of the exercise wasn’t necessarily to learn how to vibrate a hairspring, but it was learning the individual steps that made up the process and how to apply those in the real world that was the lesson.

Now that I have this post out of the way, I am going to get back to a more regular posting schedule. I have started working with the lathe, so I will be updating my blog as I go through that process. I am looking forward to learning how to machine small parts, so this next section is going to be a lot of fun. It will be challenging, but it will be fun.

2 responses to “Update: Hairspring Vibrated! Also, where I’ve been…”